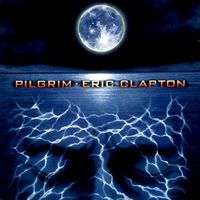 Pilgrim's release marked Clapton's first album of original material since 1989's Journeyman. Reviews for Pilgrim were mixed upon release. Allmusic described the album as "bland", while Rolling Stone's David Wild gave it four out of five stars, stating, "Pilgrim is the work of someone who has learned in the hardest way imaginable that although he cannot change the world, he might be able to change himself."

Clapton wrote in his autobiography that he wanted to make the "saddest album" to the moment, so he called Simon Climie and started the project. He had already written two songs when his son, Conor, died in March 1991. The songs ended up being "My Father's Eyes" and "Circus", originally named "Circus Left Town". "Circus" was about the last time he saw his son, when he took him to the circus. According to Clapton's autobiography, Conor died the next day.
The album experiments with drum machines and certain sounds like synthesizers, guitars, strings reminiscent of R&B.
The song "Pilgrim" also appears on the Lethal Weapon 4 soundtrack.
Four tracks of this album were included on the One More Car, One More Rider album of 2001.

An acoustic version of "Broken Hearted" was performed at the Royal Albert Hall in 1997. Clapton and John Mayer resurrected the song in 2005.