Album After Hours (The Weeknd). Songs and videos online 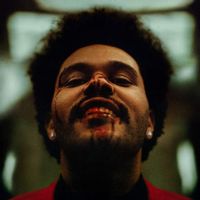 Album songs of After Hours - The Weeknd

Radio stations where the album songs After Hours - The Weeknd sounds

Background
The Weeknd first teased that he was working on a new album in November 2018, via a performance in which he told the crowd that "Chapter VI was coming soon." On January 12, 2019, Tesfaye then proceeded to further tease the project and its sound by tweeting "no more daytime music" to fans, making media outlets believe that he was set to continue the darker music found in My Dear Melancholy. Following a trio of collaborative singles throughout 2019, on August 6, he further reassured fans that he was working on his fourth studio album. Then after a five month period of silence, on November 24 the single "Blinding Lights" was revealed through a Mercedes-Benz television commercial, with reports of "Heartless" surfacing a day later. The latter song then premiered on the seventh episode of The Weeknd's Memento Mori Beats 1 radio show on November 27, 2019. Which in the hours leading into the release of the radio show episode, The Weeknd announced on social media his return to music with the captions "the fall starts tomorrow night" and "Tonight we start a new brain melting psychotic chapter! Let's go!". Both singles were met with critical and commercial success, with "Heartless" becoming his fourth number one on the US Billboard Hot 100 and "Blinding Lights" reaching number one in various countries worldwide. On February 13, 2020, The Weeknd revealed the title of the project "After Hours" through a 48 second teaser. A couple days after the announcement of the album's name, its release date of March 20, 2020, was shared through social media to accompany the title track's release as a promotional single. In the last week leading up to the album's release, After Hours' tracklist was revealed on March 17, 2020. On March 19, 2020, The Weeknd announced that the album is dedicated to long time fan and host of the popular XO Podcast, Lance, who died the night before. The album debuted alongside the eighth episode of Memento Mori on March 20, 2020, with The Weeknd also hosting a Spotify listening session upon its release.
Now playing
Wellboy — Gusi Хіт FM Українські хіти
Віталій Козловський — Мала, танцюй Power FM
Антитіла — Кино Є! РАДІО
Galibri & Mavik — Федерико Феллини Kiss FM Trendz
Hurts — Redemption Хіт FM Сучасні хіти
MAMARIKA — KAVA Наше Радіо УкрТоп100
Тима Белорусских — Незабудка Дискотека Русского Радио Україна
Chris Rea — Looking For The Summer Мелодія FM Romantic
On I Ona — Вода (Не такі, як всі) Best FM
MONATIK та Вера Брежнева — ВЕЧЕРиНОЧКА Русское Радио Україна
The Kid LAROI, Justin Bieber — Stay Flash Radio
Coldplay — Adventure Of A Lifetime Хіт FM Найбільші хіти
Dire Straits — Your Latest Trick Radio Relax
Maroon 5 & Christina Aguilera — Moves Like Jagger Мелодія FM Disco