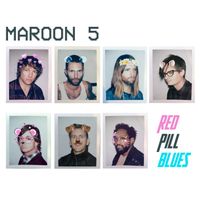 Radio Relax International
226
NRJ All Hits
111
Radio EgoЇсти
53
Radio Relax
45
NRJ Hot 40
35
Радіо Трек
18
BumbleBee
6
Радіо 10
4
Power FM
4
NRJ
1
Radio Fresh
161
Радио Energy
126
ТНТ MUSIC RADIO
46
Радио Пассаж
14
ХАЙП FM
1
Red Pill Blues is the sixth studio album by American pop rock band Maroon 5. It was released on November 3, 2017, by 222 and Interscope Records. This is the band's first release to feature Sam Farrar as a studio member after becoming a touring member in 2012. The title of the album refers to the science fiction term of taking the red pill or the blue pill, which originated from the 1999 sci-fi film The Matrix.

Background
After touring in support of their fifth studio album V (2014) for over three years, Maroon 5 began planning a follow-up to V. Previously, the band had released two commercial singles. On October 11, 2016, the group released the tropical house single "Don't Wanna Know", featuring American rapper Kendrick Lamar. Another single, entitled "Cold", featuring American rapper Future, was released to digital retailers on February 14, 2017 and to Top 40 radio on February 21. After embarking on a short rescheduled headlining tour in North America in March 2017, the band began to finish recording new material for a sixth album at Conway Recording Studios in Los Angeles, California. The band began posting teaser gifs and videos on their social media accounts of members in the studio in late March.

At the 2017 Teen Choice Awards, held on August 13, 2017, Maroon 5 was honored the Decade Award. In his acceptance speech, frontman Adam Levine confirmed that their sixth album would be released in November. Levine later confirmed this in an interview with Zane Lowe on Apple Music radio station Beats 1. On October 4, 2017, the band announced pre-orders for the album to begin October 6.

Artwork
The album cover art is inspired by filters featured on the mobile application Snapchat. The cover depicts all seven members of Maroon 5 pictured on polaroid photographs with a filter on their faces. "We all use Snapchat, and the filters have become a huge part of the culture", frontman Adam Levine told Billboard in an October 2017 interview. "We thought it would be funny to take some more straight-ahead band photos and sprinkle in a little fun." Guitarist James Valentine added by saying "It's like, a part of the zeitgeist now. Adam and his wife, they just love trading photos when we're touring and stuff. They're always doing those filter faces to each other, so I think it rose out of that. Adam always has fun with that."

Singles
The album was preceded by two commercial stand-alone releases. "Don't Wanna Know", featuring American rapper Kendrick Lamar, was released to digital retailers on October 11, 2016 and charted at No. 6 on the U.S. Billboard Hot 100 and topped the Adult Top 40, Adult Contemporary, and Hot 100 Airplay charts. A music video for "Don't Wanna Know" premiered on October 14 on The Today Show.

A second stand-alone single, "Cold", featuring American rapper Future, was released on February 14, 2017, and charted at No. 16 on the Billboard Hot 100 and No. 5 on the Adult Top 40 chart. The music video for "Cold" premiered on February 15.