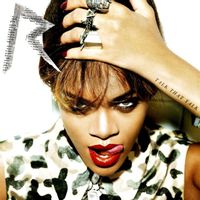 Хіт FM Найбільші хіти
225
NRJ All Hits
83
Хіт FM
77
NRJ
54
Радіо Трек
38
Radio City
23
BumbleBee
7
Радио Обоз
6
Power FM
1
Best FM
1
Talk That Talk is the sixth studio album by Barbadian recording artist Rihanna, released on November 18, 2011 through Def Jam Recordings. The album was recorded from February 2011 to November 2011. As the executive producer of the album, Rihanna enlisted a variety of producers to collaborate with including Alex da Kid, Mr. Bangladesh, Calvin Harris, Dr. Luke, Stargate and The-Dream. Sonically, the album is rooted in pop, dance-pop and R&B, but also incorporates a variety of other genres such as hip hop, and electro house. The album is also noted for its use of dubstep in tracks such as "You da One" and "Red Lipstick".
Talk That Talk combines a variety of musical genres such as hip hop, R&B, electro house, electro, dancehall and dubstep, a genre first incorporated on Rihanna's fourth studio album, Rated R (2009). The album differed from Rihanna's previous release, Loud (2010), which featured a prominently up-tempo and pop genres, ranging from dance-pop to electro-R&B, and marked her return to her dancehall roots. Talk That Talk foreboding and angry tone with dark themes and incorporated elements of hip hop, rock, and dubstep music genres, which was prominent on her 2009 release Rated R. Talk That Talk did incorporate dancehall themes as seen in her earlier albums Music of the Sun (2005) and A Girl Like Me (2006).
Upon its release, Talk That Talk received generally positive reviews from music critics, who commended its musical direction and dance tracks, but were ambivalent towards its composition and lyrics. The album debuted at number three on the US Billboard 200, with first week sales of 198,000 copies in the United States. As of June 2012, the album has sold 909,360 copies in the United States. The album peaked at number one in Austria, New Zealand, Norway, Switzerland and the United Kingdom, where it debuted at number one on the UK Albums Chart, selling more than 163,000 copies in its first week. As of December 2011, the album has been certified two-times platinum by the British Phonographic Industry (BPI) for shipments of 600,000 copies.
Five singles have been released from the album. The debut single, "We Found Love" premiered on September 22, 2011, and quickly became Rihanna's eleventh number one hit in the US, placing her in third place alongside Whitney Houston for the female artist with the most number-one singles on the chart, behind only Madonna and Mariah Carey. The song remained atop the chart for ten non-consecutive weeks, surpassing "Umbrella" as Rihanna's most successful run on the Hot 100 to date. The track also topped the charts in 26 additional countries. The second single, "You Da One" was moderately successful both in the United States and internationally, peaking at numbers 14 and 16 on the Billboard Hot 100 and UK Singles Chart, respectively. The eponymous "Talk That Talk", featuring rapper Jay-Z, and a remix of "Birthday Cake" featuring singer, Chris Brown, were released as the album's third and fourth US singles, to moderate success. Despite no official release of the remix or a music video, the latter managed a peak of 24 on the Billboard Hot 100, and reached number two on the US Hot R&B/Hip Hop Songs chart. "Where Have You Been" was released as the fifth US and third international single from the album, currently reaching the top ten of ten countries around the world, including at number six on the UK Singles Chart, and number 5 on the Billboard Hot 100.
Now playing