Album thank u, next (ARIANA GRANDE). Songs and videos online 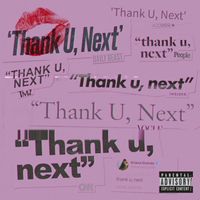 Album songs of thank u, next - ARIANA GRANDE

Radio stations where the album songs thank u, next - ARIANA GRANDE sounds

The title track was released as the album's lead single on November 3, 2018 and became a commercial success, peaking atop of the charts of 12 countries and becoming Grande's first number-one single on the US Billboard Hot 100. The track also broke a string of records, including the record for the most plays in a single day by a female artist on Spotify. Its second single, "7 Rings", was released on January 18, 2019 and also performed well internationally, peaking at number one in 15 countries and making Grande the third female artist to have two or more songs debuting atop of the Billboard Hot 100. "Break Up with Your Girlfriend, I'm Bored" was released as the third single on the day of the album's release. In support of both Sweetener and Thank U, Next, Grande will embark on the Sweetener World Tour, beginning in March 2019.

Background
In September 2018, Grande's ex-boyfriend, rapper Mac Miller, died from a drug overdose. The following month, Grande announced that she would take a break from music. That same month, however, Grande revealed that she had been in the studio working on new music, and she announced the Sweetener World Tour (2019). She stated that the tour would support both her fourth studio album, Sweetener (2018), and her upcoming fifth studio album. Later in October 2018, Grande broke off her engagement with comedian Pete Davidson. Without prior announcement, Grande released the title track of the album as the lead single on November 3, 2018.

Promotion
Singles
"Thank U, Next" was released as the lead single from the album on November 3, 2018. She performed the song on The Ellen DeGeneres Show on November 7.