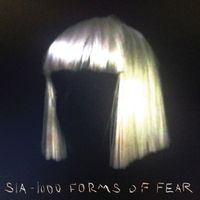 1000 Forms of Fear received mostly positive reviews from music critics, who praised Furler's vocals as well as the album's lyrical content. The album debuted at number one on the US Billboard 200 with first-week sales of 52,000 copies. As of October 26, 2015, it has been certified Gold by the RIAA denotining sales of 500,000 copies in the United States. The release also charted atop the charts of Australia and Canada, and reached the top five charts of Denmark, New Zealand, Norway, Sweden, Switzerland, and the United Kingdom.

The album spawned four singles. Its lead single, "Chandelier", released in March 2014, became a worldwide top-10 single; it also peaked at number eight on the US Billboard Hot 100, becoming the first song by Furler to enter the chart as a lead artist. "Big Girls Cry" was released in June 2014. Furler's solo version of "Elastic Heart", which was originally a collaboration with The Weeknd and Diplo, was released in January 2015. "Fire Meet Gasoline" was released as the fourth and final single in Germany on June 19, 2015. The official music video for Chandelier has been viewed on YouTube more than 1.2 billion times, and video for "Elastic Heart" has been viewed more than 500 million times.

To promote the project, Furler appeared on a number of TV shows, including The Ellen DeGeneres Show and Jimmy Kimmel Live!, where she recruited Maddie Ziegler, who starred in three music videos from the album, as her persona onstage, during 2014 and 2015. 1000 Forms of Fear earned Furler three ARIA Music Awards in 2014 and was listed as one of the best albums of 2014 by several publications, including The Boston Globe and Rolling Stone. The lead single "Chandelier" received four Grammy nominations for Song of the Year, Record of the Year, Best Pop Solo Performance, and Best Music Video.
Now playing