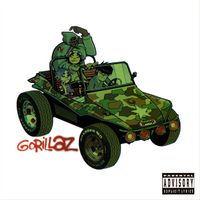 Throughout the album the band experiments with many combinations of genres, including hip hop, rock, Latin, punk, dub, acid jazz, and reggae. The beginning of the song "M1 A1" features a successive sound clip from the movie Day of the Dead. The song "Dracula" features sound clips from Merrie Melodies' Transylvania 6-5000. The song "Slow Country" features a sample from The Specials' 1981 single "Ghost Town". A sampled loop from "In the Hall of the Mountain Queen" by Raymond Scott is repeated throughout the song "Man Research (Clapper)". The song's title is a nod to Raymond Scott's Manhattan Research.

It was recently revealed that the track "Starshine" has an alternate version, which features Luton-based rap group Phi Life Cypher. This version is not available on any releases, but it is available on the Phi Life Cypher SoundCloud channel and also on the video-sharing website YouTube.

All editions of the Gorillaz album feature an enhanced section that included screen savers, wallpaper and an autoplay, featuring a short movie which opens the user's internet browser to a special section of the Gorillaz website, http://murdocswinnebago.com, which gives the user full access to Murdoc's winnebago.