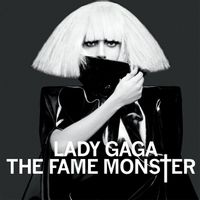 Musically, The Fame Monster is a pop album influenced by a number of genres, prominently the disco, glam rock and synthpop music of the 1970s and 1980s, as well as industrial and Gothic music. The album was also inspired by fashion shows and runways. According to Gaga, the album deals with the darker side of fame, including love, sex, alcohol and more. Lyrically, they are expressed through a monster metaphor. The cover artwork was done by Hedi Slimane and has a Gothic theme, as described by Gaga herself. The artwork was originally declined by her record company, however, Gaga convinced them to go through with it. The Fame Monster received generally favorable reviews from music critics. In some countries, the album charted with The Fame, and topped the charts in multiple nations, including the United Kingdom, Australia, Austria, Belgium, Finland, Germany, Ireland, New Zealand, Poland, and Switzerland. In the United States, it reached number five on the Billboard 200 albums chart, and topped the Dance/Electronic Albums chart.