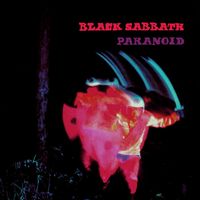 Radio ROKS Hard'n'Heavy
1240
Radio ROKS
407
Greatest Songs Radio
117
Bloger.FM
58
Rock FM
41
Радио Рокс
19
Европа Плюс
1
Paranoid is the second studio album by the English heavy metal band Black Sabbath. Released in September 1970, the album was the only one by the band to top the UK Albums Chart, and as a result is commonly identified as the band's magnum opus. Paranoid has been certified four times platinum by the RIAA and contains some of the band's best-known signature songs, including "Iron Man", "War Pigs", and the title track.To capitalise on their chart success in the US, the band returned to the studio in June 1970, just four months after Black Sabbath was released. The new album was initially set to be named War Pigs after the song "War Pigs", which was critical of the Vietnam War; however, Warner changed the title of the album to Paranoid when what would become the album's lead-off single, "Paranoid", was written in the studio at the last minute. As Bill Ward explains: "We didn't have enough songs for the album, and Tony just played the [Paranoid] guitar lick and that was it. It took twenty, twenty-five minutes from top to bottom." The single was released in September 1970 and reached number four on the UK charts, remaining Black Sabbath's only top ten hit. The album followed in the UK in October 1970, where, pushed by the success of the "Paranoid" single, it made number one in the charts.

The US release was held until January 1971, as the Black Sabbath album was still on the charts at the time of Paranoid's UK release. The album reached No. 12 in the US in March 1971, and would go on to sell four million copies in the US, with virtually no radio airplay. Like Black Sabbath, the album was panned by rock critics of the era, but modern-day reviewers such as Allmusic's Steve Huey cite Paranoid as "one of the greatest and most influential heavy metal albums of all time", which "defined the sound and style of heavy metal more than any other record in rock history". In 2003, the album was ranked at No. 130 on Rolling Stone magazine's list of The 500 Greatest Albums of All Time. Paranoid's chart success allowed the band to tour the US for the first time in October 1970, which spawned the release of the album's second single "Iron Man". Although the single failed to reach the top 40, "Iron Man" remains one of Black Sabbath's most popular songs, as well as the band's highest charting US single.
Now playing